I really should avoid drawing attention to this negative topic today, on my daughter’s sixth birthday; however, it is probably as good a day as any to discuss an issue that is weighing heavy on my heart.

During a few moments of free time this morning and afternoon, I shamelessly scrolled through Facebook to pass some time because…why not? Within a few swipes up, I realized that nearly all of my news feed was saturated with posts about CBS running a story on Iceland and the country’s extremely high termination rate for babies given a prenatal diagnosis with Down syndrome. It was probably more noticeable to me because a large majority of my friends on Facebook are fellow parents of a child with Down syndrome or self-advocates. Other countries like Australia are part of a very similar discussion.

If any of this is news to you, then go ahead and click on the links throughout this post to get up to speed.

I would like to point out that CBS actually used this headline:

“Iceland Is On Pace To Virtually Eliminate Down Syndrome Through Abortion.”

On pace? How nice. Are they racing someone?

The idea of eradicating Down syndrome is a controversial subject, and obviously it does not sit well with me. My college roommate used to always say, “…variety is the spice of life, my friend.” While the phrase used to crack me up, she was absolutely right. Maybe she wasn’t referring to people as much as she was cheap beer selections, but seriously. Since when did we as the human race get to decide that a population of people no longer gets to exist or that those lives have no value? Most importantly, what are the reasons that justify this?

Six years ago today I sat in my hospital bed, isolating myself from reality while I digested the news of my daughter’s surprise birth diagnosis of Down syndrome.  Like many unsuspecting parents, our world was rocked.  When we were offered prenatal testing while I was pregnant, we declined knowing that we would not change anything about our pregnancy; and that our arms and hearts would lovingly welcome our child.

Did that make receiving the diagnosis less difficult? No. Were we scared? Out of our minds. We had no idea what to expect. We were left with our own drawn up versions of what we thought Down syndrome was based on what we could remember as kids; which–by the way–was basically nothing.

Thankfully for us, our doctor was compassionate and kind. She was all we had at that moment to tell us anything about what it meant to be born with an extra chromosome. While she did deliver some common, basic facts about Down syndrome, she did so in an unbiased and professional manner. She also reassured us that our daughter would live a full and wonderful life with us, and that she was certain that we would all be just fine.

I can only imagine what these parents in Iceland are told their lives will be like with a child like mine and how untrue what they’re told really is. Conflicting, outdated and biased opinions about Down syndrome as a whole. But you know what? It is happening right here too. The horrific diagnosis stories I have been told by mothers here in America continue to blow my mind. I wonder if doctors and parents saw another side of Down syndrome–the human side–would the percentage decrease?

Truthfully I can only speak from my perspective, and I am comfortable with my beliefs. While I am aware that there may be other factors and circumstances such as additional complex medical situations that contribute to the decisions that are made, I wonder about the decisions made to terminate based solely on the diagnosis and whether or not the information that is given is accurate and consistent.

Let’s not forget about the individuals with Down syndrome that are alive. What does this message of “eliminating Down syndrome” say to them? That they don’t matter either? It sure sounds that way.

As parents, we spend a lot of time fighting and advocating for our children. Much to our dismay, we often seek to prove that our children are capable of so much more than the limitations society places on them. We push for inclusion in school and the workplace, we fight for health care coverage and we encourage people to see their value. Now we fight for their right to walk on this earth.

You do not need a heart of gold to raise a child with Down syndrome. But you do need an open mind, the courage to embrace something unfamiliar and the belief that each life has value.

You know what? We are fine. Totally fine. My beautiful girl, charming and wicked smart, does not suffer from having Down syndrome. She never has. Her siblings have not suffered either. Anyone that has met her would tell you how awesome they think she is. Something prenatal testing cannot predict about anyone.

Is raising her easy? Not always. Raising my spirited four year old without Down syndrome isn’t easy. Helping to parent a stepchild also isn’t easy. There are few things about parenting that come with ease. Period.

The hardest part about having a child with Down syndrome has not been the diagnosis itself; it’s the annoyance of having to explain to she deserves to be here. 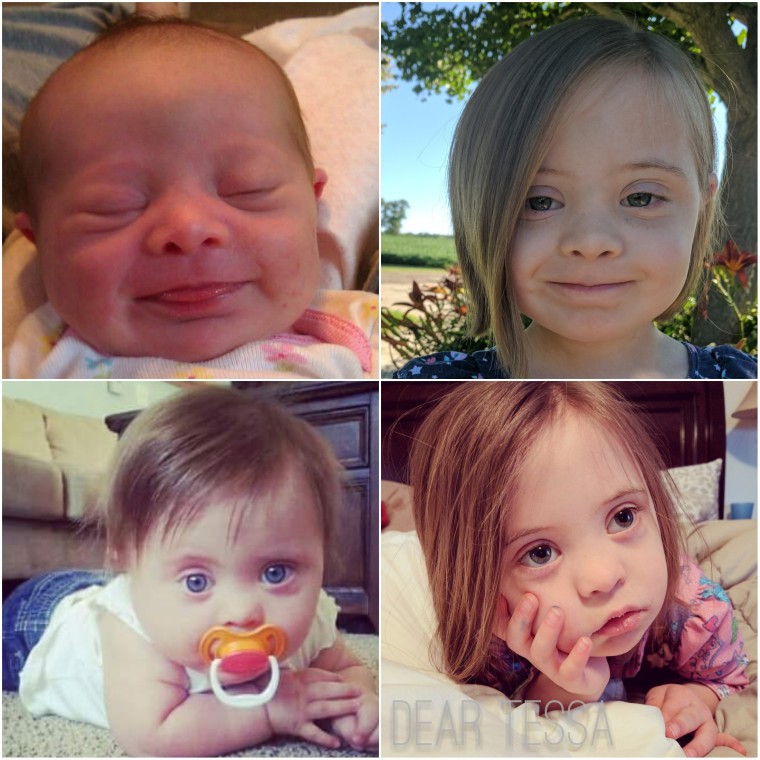 We are weeks are away from sending our six year old off to her first day of first grade in a mainstream school, and today we celebrated her sixth birthday with her friends. In another part of the world, parents are being told their unborn child (who may or may not be born with Down syndrome) does not have a place here.

Where does this end? If Down syndrome is no longer, who else will fall under the magnifying glass? While Iceland is “on pace” to “eliminate,” or kill, Down syndrome, I am on the fast track with a community of others to share that the world is big enough for everyone–including people with Down syndrome.

That’s just my two cents on the matter…

Today is the 12th anniversary of World Down Syndrome Day (WDSD).  It is a day to celebrate the lives of those born with a third copy of their 21st chromosome, which is why it falls on this day (3/21).

More importantly, it is a day to commemorate the achievements–big and small–of those born with Down syndrome. A day to share that our loved ones with Down syndrome are people with goals and expectations who can greatly contribute to the rest of the world; that their lives are incredibly meaningful and valuable. March 21 is more than likely an ordinary day for most people, but for those of us living in the Down syndrome community it has been described as a day of celebration.  A celebration of life, love, potential, hope, inclusion and acceptance.  Today we encourage unlimited possibilities in the futures of our children.  We are more proud than ever to share how Down syndrome has touched our lives.  We stand together to remind everyone that we are a strong community based on a sense of togetherness that is moving mountains.

People may honor World Down Syndrome Day in different ways.  Some people wear brightly colored or mismatching socks, while others wear blue and yellow. Some perform random acts of kindness, share videos, photos or blog posts. Some may not acknowledge or celebrate the day any differently.  All of which is just fine.

As for us?  We will be taking blue and yellow treats to my daughter’s annual IEP meeting which happens to fall on WDSD this year.  On a day where inclusion and acceptance takes the global stage, we will be attending an IEP meeting expecting the same for our daughter (thankfully, we are in a place where that happens). How’s that for irony?

Please know what this day may mean to many people out there like me.  Most of us long for the same opportunities for loved ones who carry an extra chromosome–equal opportunities and the chance to show what they are capable of.  A life without boundaries where they are encouraged to dream big and flourish; one where a chromosome does not solely define a being. Do you know someone carrying an extra chromosome?  Maybe you are a parent, sibling, cousin, teacher or a friend.  If you could tell the world something about the person you know with Down Syndrome, what would it be?

I would say this:  Tessa is a remarkable person.  She is not more or less because she has Down syndrome.  Tessa is genuine, smart and funny; and she has unknowingly taught me a great deal about kindness and compassion.

You can also make a $21 pledge at Ruby’s Rainbow to help support higher education of young adults with Down syndrome by visiting https://321pledge.org/

*This post is a collective post of past writings about World Down Syndrome Day on this blog.