At 12:34 in the afternoon on this day one year ago, my husband and I welcomed our first daughter into the world.

She surprised us from the start

With a tiny piece of her that would change our lives forever. 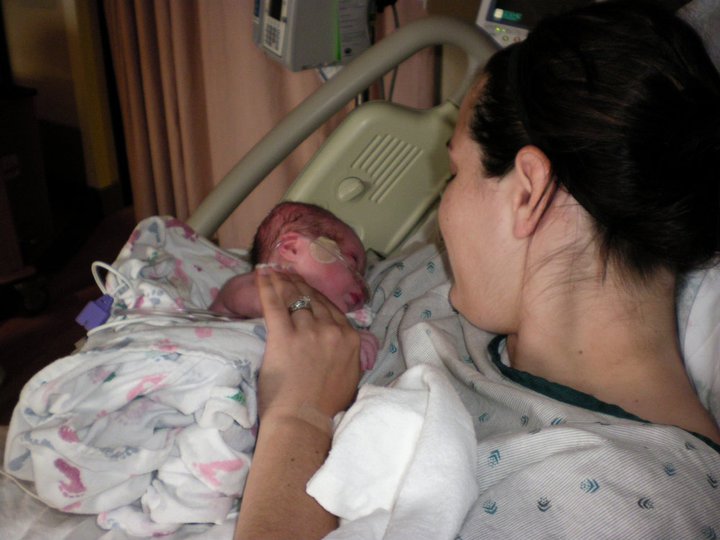 But I gave her my heart and she healed it fast.

At this very moment three hundred and sixty five short days ago our world was shaken, but certainly not destroyed.  And at this moment on that very day, I sat in my hospital bed begging for anyone to take away the horrible pain I was feeling as I looked at my daughter.  They told me it would end.  They told me we would be fine.  They held me until it was time to go home.  Little did I know, she would be the one who would end up calming the storm.

Tessa Jo Carey, six pounds-two ounces and eighteen and a half little inches long.  Little?  Yes, but a character that was much larger than life.  I remember how deep her eyes were.  They were almond shaped and blue as the midnight sky.  I remember staring through my overly swollen and foggy eyes into those two fascinating eyes of mystery.  I placed a pink flower clip on her pink knit hat from the hospital because that’s what I dreamed about doing the moment she arrived.

We didn’t talk about how she was born with Down syndrome.

She was rocked in the wooden chair in the corner of the room by her Uncle Merrill who is now her Godfather, given her first swimsuit by her great Aunt Janet and her girls, showered in kisses by her cousin Allie who called her “Kitty.”  She was loved fiercely by her grandparents and adored by everyone else around her.

We didn’t talk about the possibility of an extra 21st chromosome because to everyone else all that mattered was that she was here, and she was healthy and beautiful.  But it flashed vibrantly in my head as often as possible; Down syndrome—and I knew nothing about it.

For the next two to three months, I was repeatedly told that “God only places the biggest of burdens on the broadest of shoulders,” or “…that special children are given to special people…”  I do believe that I was made for this journey, but I certainly do not believe that she is a burden.  And who doesn’t think their child is special?  Of course I think Tessa is special, just not in the stereotypical sense that I may be expected to.  Often times instead of being congratulated, people would say:  “I’m so sorry about your daughter” or “She doesn’t look like she has Down syndrome.”  I was told how strong I was and how brave we were.  I can tell you that I was never given an extra dose of strength or courage separate from anybody else.  I was given a baby, and I would like to think almost every mother does the same for their child(ren).

I am not sorry for her existence.  I am thrilled that she is mine.

We quickly learned of her sweet and innocent charm that won over the hearts of many.  Over the past year, we have watched a persistent and determined little girl with a spicy personality grow from a tiny newborn to a budding one-year old.  Today, we see fireworks when her smile lights up a room.  We feel total ecstasy when she falls asleep on us in the chair.  We witness tremendous amounts of love that surround her from her big brother and other relatives.  We do not see a chromosome “altering” her life and we certainly don’t feel sad. 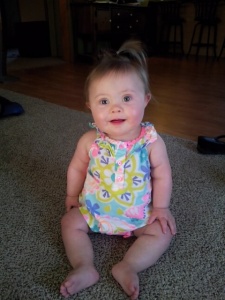 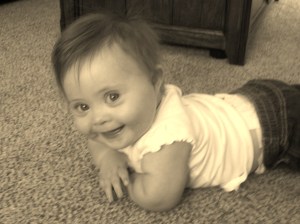 Kelle Hampton posted a blog about how she celebrates every little miraculous thing
her girls do because it doesn’t matter if it isn’t important to anyone else or if her children won’t remember it.  Just celebrate—celebrate everything from first smiles to first pat-a-cakes to first words to first horrible vegetable that was not spit back at you for once to half birthdays to first birthdays.  Definitely celebrate birthdays. This is a whopper of a birthday!  And there is plenty more party to come…after she finishes her first cupcake, of course.

We’re not just celebrating the day she was born, we are honoring her first year.  Her first year was nothing like what we were expecting—it was more, so very much more.  Because if there is anything I learned in the last twelve months, nothing is predictable.  Sit back and hang on tight, this ride might be scary at times but it is exciting as hell!

And there is nothing that we would ever change.

So here’s to my daughter…to her first year in this rowdy world.  Here’s to never giving up.  Here’s to everything she has done that gave us so many reasons to celebrate.  Here’s to throwing away statistics and dreaming big.  Here’s to a lifetime of success and happiness.  We are honored to be her parents.  What a great first year!

Our beautiful niece Kylie had her high school graduation last night. Instead of a ceremony, they had an awesome parade through our community...and I sort of hope this becomes a new tradition that's added to future graduation celebrations. Way to go Kylie! We are so proud of you. Congrats class of 2020 💙