I’m beyond excited to share my very first post with you on my new site!  It feels awesome to see how I’m moving along in the blogging world.  But mostly, I’m just excited that I’ve graduated to a legit page!  So I hope this is just as exciting for you readers as it is for me! 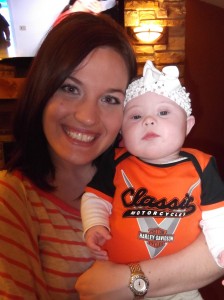 I will get you up to speed on how Tessa has been doing.  In January she started Physical and Speech Therapy both once a month, as compared to how she was only doing it once every three months prior.  She did so well in her last therapy sessions, it was quite incredible!  Her muscle tone has greatly improved, and she is using her mouth and tongue just as she should be.  To many of you, that’s really no big deal, but to us-it’s HUGE!  She has also started holding her bottle all on her own.  And I must say that she is pretty impressed with herself.  Overall, she is doing quite well and isn’t needing much extra assistance.

Only a few small bumps in the road recently, but nothing we can’t handle.  We certainly haven’t let any of them slow us down.  Sometimes I get caught up in the cool heartache and begin to feel overwhelmed.  Then I remember two simple words:  just breathe.  I feel like we are getting more of a grasp in this complicated world of Down Syndrome.  It’s getting more comfortable to talk about–even for Dan.

We have come quite a distance since August 15, 2011–almost six months!  Looking back to that day I’ve realize something:  These days, that are passing by far to quickly, are only the beginning of even greater days to come.

If any of you followed my previous page, you knew how we had BIG goals for 2012.  On Monday night, we put a huge line through one of them!  I will get to that later in this post, so keep your eyes peeled…

Did I happen to mention how much Dan is wrapped around Tessa’s tiny finger?  It’s insane…We went to Chula Vista in Wisconsin Dells this past weekend where, outside of the bathtub, Tessa went swimming for her first time.  Let me tell you, Buggy is a mad swimmer–end of story.  Getting back to the point…Dan had taken Tessa to the kiddy pool at some point.  They were literally sitting in the pool for what he says was only seconds, when a small child (maybe about 2 years old) came up to Tessa and clubbed her right on top of the head!  He said it took so much restraint to not come unglued on this kid for smacking his baby girl.  Listening to him tell the story, I had to laugh only because I was picturing the whole scenario in my head–Dan sitting in a kiddy pool with Tessa in her chic one strap, black swimsuit, and a curious little guy closed fist hitting her in the head.  How did Tessa react, you ask?  Confused.  Not a single tear.  I mean seriously, it won’t be the first and definitely won’t be the last time she gets hit, bit, kicked, scratched, etc. And I can assure you that she will probably deal some devastating blows in her future to some poor, unsuspecting children.  But it doesn’t matter.  That’s where she is with her daddy, tucked right under his ar 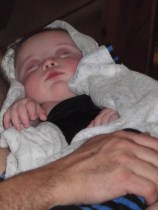 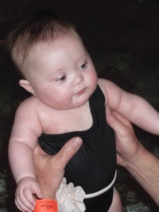 Too much swimming equals one sleepy baby.

Prior to our trip to the Dells, little Bug had been battling her congestion again.  When she wasn’t battling that, she was vomiting–I mean like in-your-face, projectile vomiting.  The kind that was even making me nauseous.  A little too much?  Well, maybe.  That’s what we went through for ten long freaking days.  When that was finally over, she was one hundred times more congested. But in the midst of it all, she learned a very valuable life lesson… 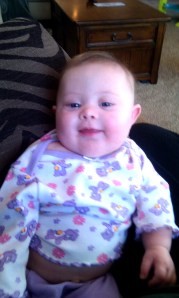 That Care Bears, even if in pajama form, make everything better!

Lastly, I said I would get to the big goal we scratched off this week.  One of the things we knew we needed to accomplish was telling Tessa’s big brother Casin about her Down Syndrome diagnosis.  Originally we didn’t want to share this with him for a while.  But ultimately, we decided that we wanted him to hear it first from us.  We wanted him to be prepared.  We wanted to educate him.  We wanted him to know.  It was time.  Dan and I talked a lot about how to tell him in a way that might be easy for him to understand.  After all, it’s still hard for us to understand the continuous medical jargon that is thrown our way.  How could he ever understand?  So…we made a story about his little sister.  Seeing how sharing this with him is such an important part of our journey, we decided to share it with you.

After we recorded the video, Dan, Casin, Tessa and I all had a long talk about what Down Syndrome is and what it meant for his sister.  We expected curiosity, concern, and questions.  We got just that.  He handled it just like we thought he would.  He loved her no less.  He gave her a big kiss.  He held her hand and said he would always be there for her.  Lord, did it make my heart swell–so much that my eyes even started to water.  We told him he will probably have more questions as he learns more about it and we encouraged him to ask them.  We talked about any kids he knew that might have different needs or may need special help sometimes.  We talked about kids with different backgrounds.  We talked about differences.  We talked about acceptance of others.  Casin is an incredibly smart boy.  His love knows no bounds for anyone.

If only everyone saw the world through a child’s eyes.  They would see innocence beyond belief, greatness without limitation, and love without judgement.  Sometimes I believe that children only know what they are taught, then there are times like these when I realize I am so wrong.  I would love to think that the sole reason for his kindness is because he comes from two pretty great households, and while that may have a lot to do with it, I truly believe he has just always known how to care for people.

There it is…a definite lengthy first post.  Here’s to you and following our journey!